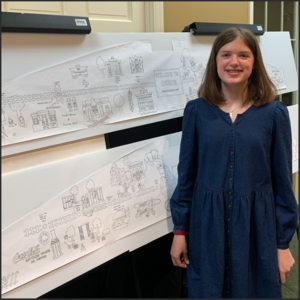 Kate Frame, a 6th grader at Corinth Middle School, won the county-wide Cass Street Mural Contest with a design that featured a timeline of the history of Corinth from 900 A.D. to 1982.

Sponsored by Visit Corinth and the Commission on the Future of Alcorn County, the mural contest was open to all artists from Alcorn County with the goal that “the mural should add beauty, express unity, represent our community and make all feel welcome.” Her submission was chosen among 14 entries.

“While we received many wonderful submissions and ideas through the contest, Kate’s renderings of the fascinating timeline of the history of Corinth, drawn to match the space of the underpass walls, were a stand-out among the entries. It was apparent to the Selection Committee that a lot of time, research, effort and energy was put into the unique and creative submissions,” said Lane Yoder, executive director of the Commission on the Future of Alcorn County.

When coming up with design inspiration for the mural submission, the 12 year old focused on the past. “When people think of the history of Corinth, they think of all of the old buildings and the Civil War side, but really there is a lot more to the history of our town. There is so much [history] that I could only draw so many of the events. There is still a lot more people can learn,” said Kate.

The mural featured the Chickasaw Native Americans, Gulf, Mobile & Ohio Railroad, Corona College for Women, Rubel Co., the Battle of Corinth, Coca-Cola Bottling Works, Moore’s Zoological Park, the Great Fire of 1924, and the slugburger, among others. “My favorite side is the side that goes from Corinth Coca-Cola to Roscoe Turner. But if I had to pick one event, it would be between Roscoe Turner and Moore’s Zoological Park,” said Kate.

Because of the mural submission incorporated both sides of the Cass Street underpass, Kate won $1,000 ($500 per side). She will collaborate with a local Mississippi mural artist this summer to make her drawings a reality.

Her reaction to winning the contest focused on the art. “Honestly, I was really excited that my drawing would be on the underpass and it would be seen by a lot of people every day. The $1,000 was a bonus, too. I did not know that there were going to be so many competitors in the contest. I can’t wait to see the other entries displayed around town,” said Kate.

Congrats, Kate, on this impressive accomplishment!